I fell in love with the Sewing Workshop’s Fillmore Duster when a friend, Marilyn Carter, had a trunk show at our local sewing and craft show back in the spring.  I found it to be an interesting silhouette and Marilyn presented a variety of options on how to wear it.  The Sewing Workshop website also has a gallery of pictures showing this garment in a variety of different fabrics as well as colour blocking suggestions.  The pattern description is:

But I couldn’t decide what fabric to use!  Should I use something with a bit more body to emphasize the shape of the garment, such as a taffeta or doupioni?  Should I use a print such as the striped fabric in the illustration?  If I use a solid colour, would the design lines show?

After much debate, another friend suggested the tencel denim because

As with previous Sewing Workshop patterns, I chose to make the small, even though with my 40″ bust, the suggested size is a medium.  Everything was coming together nicely as the instructions are well written.  Even though it was optional, I did add interfacing to the front facings as I found the front edges would ripple.  The bust fit nicely.  The mitered corners on the collar worked out well.  Then I put the bias binding on to finish the armholes and found the armholes too tight! Note how the shoulder seam extends past the edge of the shoulder.  Maybe because I have broad shoulders, this style didn’t physically work for me.  After unpicking the bias tape, local sewing guru, Fern McDonald at Sawyer’s Sewing Center, helped me reshape the armhole.  Starting about armpit level, we redrew the curve so that it measured 1.75″ or 4.5cm in from the edge of the shoulder seam.  See below for the piece we removed. Here is a picture of the new armhole. Another lesson I learned from this armhole episode, is make the bias binding fit the shape not the other way around.  Since bias binding has inherent stretch, I have a tendency of stretching the bias tape as I sew which results in shrinking the armhole shape.  If you look at the second picture of the tight armhole, you can see the gathering of the vest body under the arm.  This was because my bias tape was stretched too tight.

Once this hiccup was fixed, I had a fun conversation garment piece.  Other women have stopped me on the street to compliment me on this garment.  When they ask where I got this, I proudly say, “I made it!” July last year, my youngest sister announced she was going to get married (end of August 2017) so of course I had to make my garment for the wedding.  In England.  At Moor Park Mansion.  Lots of time!  But it’s surprising how quickly months pass before there is just 3 1/2 months left before flying outta here.

I decided to make an old favorite, New Look 6184, out of some printed linen we had in the store during the spring. I had made this dress a couple times before out of some printed stretch cotton and received many compliments so I figured I had this thing nailed. As with my previous dresses from this pattern, I made the size 16 with little adjustment except for shortening the back bodice seam by 1 1/2″.  I also made it a little longer – just below my knees – since I am not comfortable with the shorter length shown in the pattern.  But upon completion, I worried it looked too mother of the bride-ish.  Yes, I am 16 years older than this sister, have diaper changed her numerous times, bottle fed her etc, but I am not her mother! (Please note, I wore my scruffy Tom’s for walking around London, not to any of the events!  I noted that everyone in London wears flats.  Must be all the walking and the stairs to get anywhere.) So back to the drawing board.

Next, we received this printed rayon that I thought would be perfect for this New Look 6244 dress.  Because of the bias cut, which tends to be a bit clingy, I decided to make the size 18.  Again, the only adjustment I made is to make it tea length (added 6″ to the length) as the others in the store thought the longer length would be more sophisticated.  This style requires a long slip.  And what more perfect fabric for that but some silk satin.  But what colour?  I tried a variety of colours (white, pale pink, and a milky tea)  and decided the milky tea is closest to my skin colour so wouldn’t contrast so much. By this time, there were still a couple weeks to go.  Instead of sitting back and relaxing, I decided to try another dress option.  Something more party!  With a low cut back.

I decided on Vogue 1102 but despite wanting to make it in black, I was told by “those who know” one does not wear black to an English wedding.  It is just not done!  So I chose to make it out of this printed quilting cotton of all things. Looking at the finished bust measurements of the pattern, I decided to cut out the size 18.  After all, my bust is 40″ and the dress bust measurement was 41 1/2″.  I also had to cut the one piece front skirt into 2 pieces (with a centre seam) as the quilting cotton wasn’t wide enough.

I quickly basted everything together and tried it on, and it was swimming on me!  HELP!  Fern McDonald (my sewing and fitting guru) to the rescue.

Here is a list of adjustments I had to make.

For the big bow at the back, I used a wide black petersham ribbon to break up the print of the dress. Voila!  I now had 3 dresses to choose from.

Oh, also a hat.  So I went to our local millinery store, Roberta’s Hats and purchased this little number. So which dress did I choose to wear?  Why all three, of course!  I decided to wear the bias cut dress for the ceremony, the pink party dress to the reception and the printed linen dress to the in-laws after party.

I don’t know about you, but for me there is nothing like a deadline to get my a$$ in gear!

In case you are curious, here are some pictures of the wedding.  Pictures by A2Z Photography. 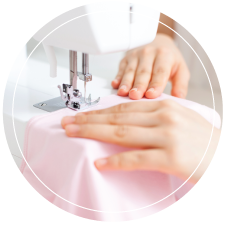